skip to main | skip to sidebar

"The object is a constraint and, because of this constraint it exists in my life, a bit like in religions, it's like having a whole series of constraints which in fact allow us to go elsewhere, that is to say to attain something stronger, more intense. All the houses are made with the desire to impose physical constraints which will mean that this house will be very real to me, and at the same time my presence within it grows in strength, because the house is very orderly, almost anonymous, and because of this anonymous aspect that it exudes, I have a double existence, because of this orderliness." 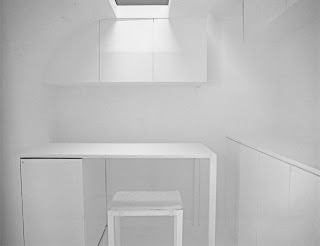 "First, it isn't a ghetto, it's a journey that I envisage for myself in that life, because I would be moving from one house to another and my nomadic life would be a lot stronger than my life today. It would be very clearly emphasised, the fact that everything fits into a single suitcase, that with that suitcase I can move about according to my needs. Each house will evoke a different atmosphere, in which I will live, and this is the life I dream of, that I long for, it's not a bad thing, it's a good thing, a thing of joy for me." 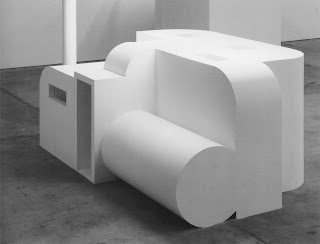 "How long is the project going to last?
How long? I dream of it lasting forever. I think that my life will be short, like all our lives. That's fine. For a life-time, that's fine." 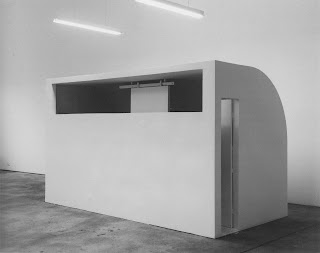 "What is the difference between a guy in Tokyo who lives in a tiny tunnel with a tiny television and myself? I mean it's the fact that he dreams of living in a big house with a swimming pool and I have chosen to live in a little tunnel with a television in front of me. And for me choice is a wonderful thing. That's what I'm suggesting to others, choosing, not just blindly obeying, their personal and private inner logic that has been suggested to us."

All quotations are from a lecture Absalon gave at the École Nationale Supérieure des Beaux-Arts, Paris, 4 May 1993. A transcription is included in the exhibition catalogue accompanying his retrospective in 2010-11 at KW Institute for Comtemporary Art, Berlin, pp. 256-71.
Newer Post Older Post Home

Since the 1960s, a number of artists, for different reasons, have taken the decision to repeat a single practice, or to make one ongoing piece, throughout their working lives.
The Single Road will explore the implications of this attitude and commitment.
Curated by Alistair Rider & Thomas A Clark